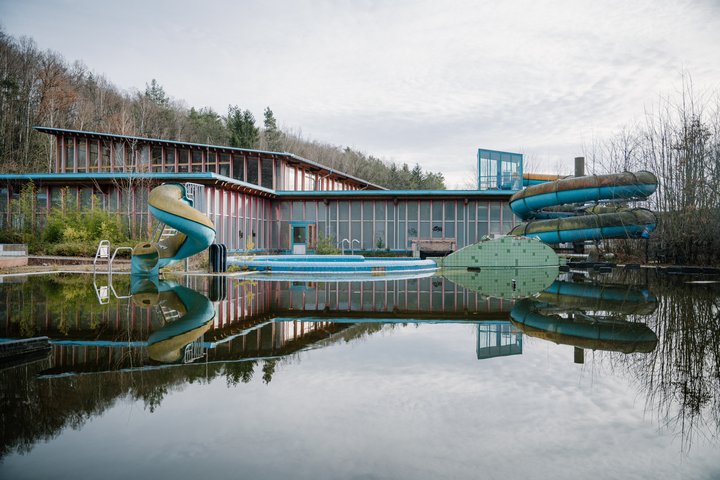 For the first time, the 19th edition of the Begehungen art festival will not take place in the urban area of Chemnitz, but in the small town of Thalheim, about 15 kilometres away. The exhibition venue will be the former Waterpark "Erzgebirgsbad", which has been unused since 2014.

Designed in 1996 as a so-called waterpark, the complex consists of an indoor swimming pool with slides, sauna and outdoor pool with an extensive outdoor area. Waterparks like the former Erzgebirgsbad are built as places for diversion, relaxation, fun and not least for sporting activity. They are places for age- and class-less enjoyment in swimming costumes, bikinis and swimming shorts.

In the specific case, the place is associated with a deep experience of loss for the Thalheim population. The reason: swimming pools are important social reference points, especially in small-town structures. When it opened, the Erzgebirgsbad was the first of its kind in the region and was well attended for many years. Later, however, other pools with a similar profile were built in the immediate vicinity. As a result, the number of visitors dropped and the town of Thalheim, once a glorious location of the textile industry and the secret "stocking capital" of the GDR, lost almost half of its population.

Almost all of the city's industrial enterprises closed down in the years after the political turnaround. The city shrank, and young people in particular moved away. As a result, the financial situation of the town itself deteriorated, but the costs of maintaining the baths rose. The bath, once built with pride, threatened to drag the municipality into the abyss financially. Amid protests, the waterpark was closed in 2014 and has been empty ever since. For a short time, it was used as accommodation for refugees, also accompanied by protests.

However, this ended an almost 100-year history, as the precursors of the Erzgebirgsbad were already established in the early 1920s. The closure and possible reopening of the bath have been discussed in the community ever since.