For the first time, the 19th edition of the Begehungen art festival will not take place in the urban area of Chemnitz, but in the small town of Thalheim, about 15 kilometers away. The exhibition venue will be the Erzgebirgsbad, which has been unused since 2014. The complex, designed in 1996 as a so-called fun pool, consists of an indoor swimming pool including slides, sauna and outdoor pool with an extensive outdoor area. 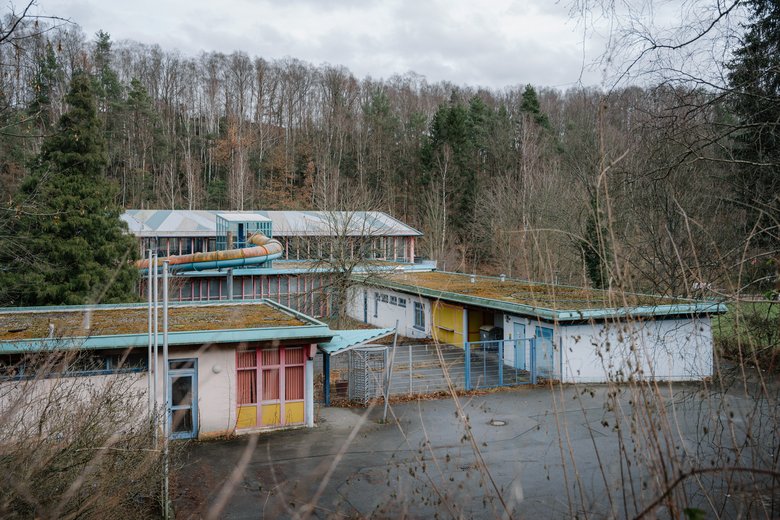 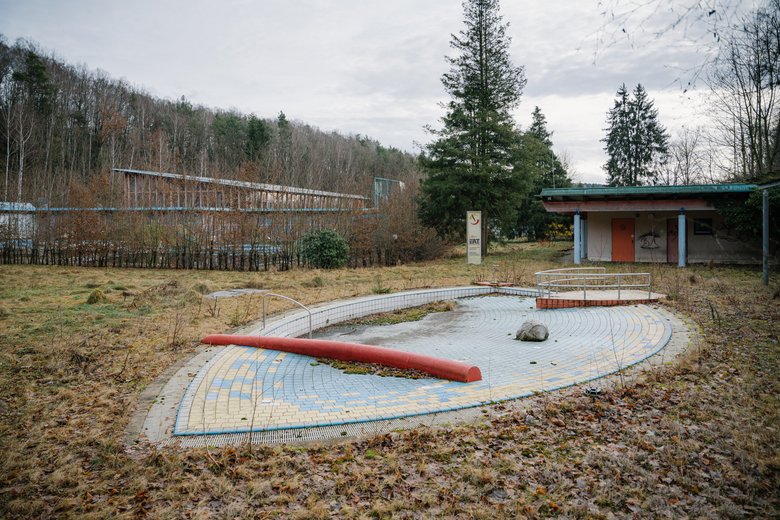 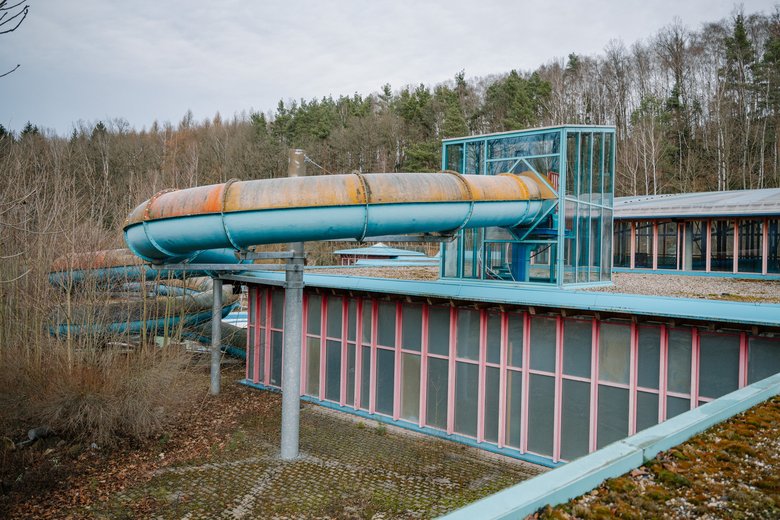 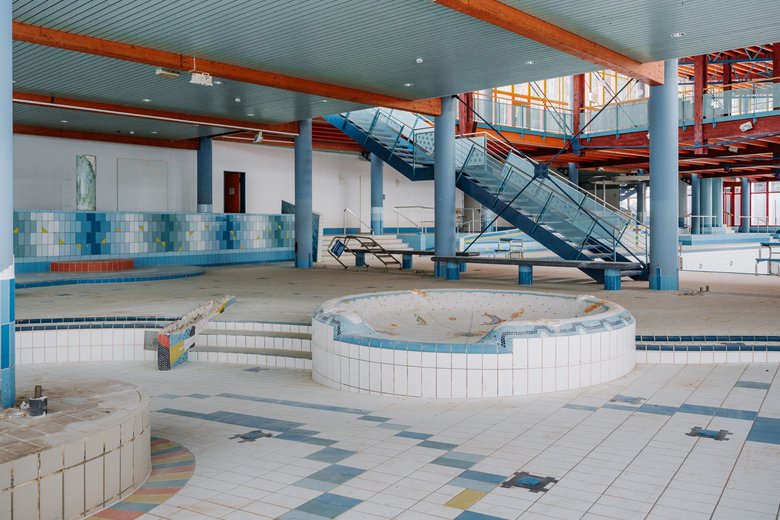 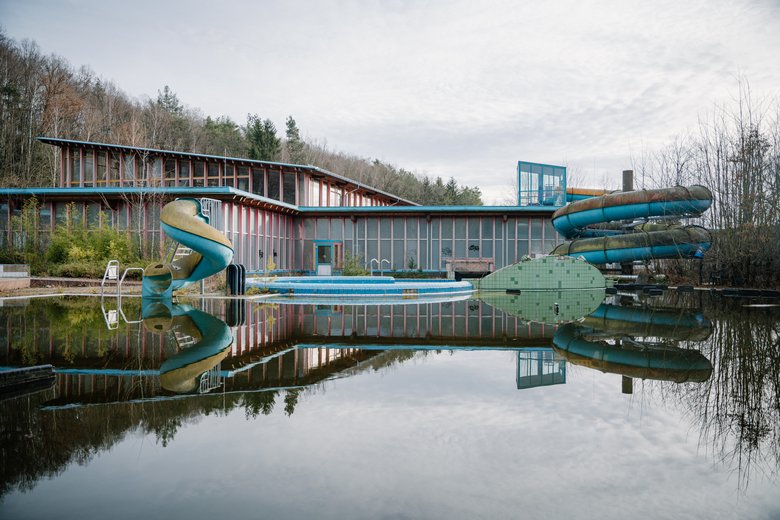 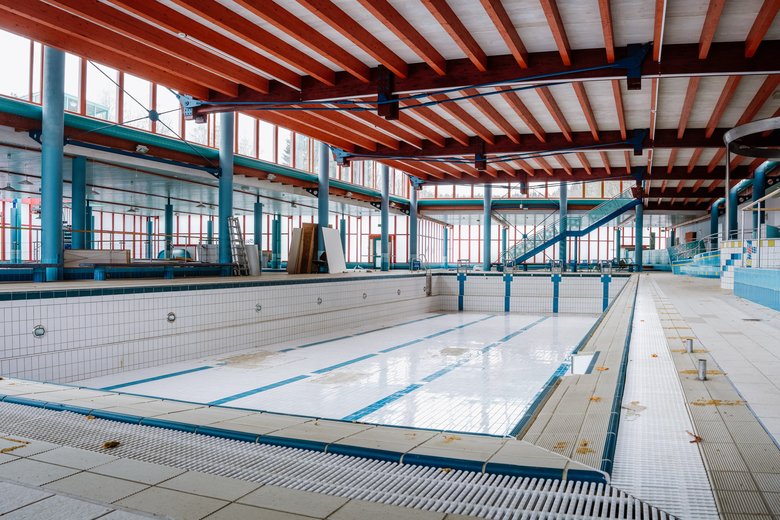 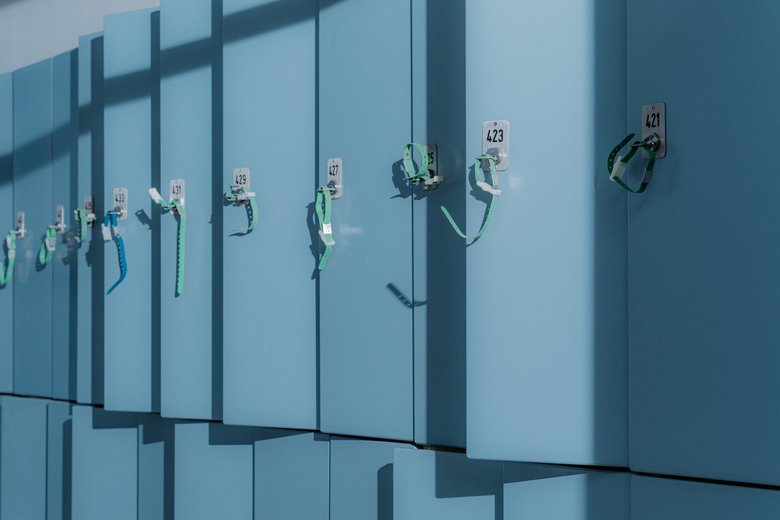 Swimming pools like the former Erzgebirgsbad are built as places for diversion, relaxation, fun and, last but not least, for sporting activity. They are places for an age- and class-less pleasure in bathing suits, bikinis and swimming shorts.

Considering the place, "PLANSCH" was chosen as the theme of the 2022 festival.

In the specific case, the place is connected with a deep experience of loss for the Thalheim population. The reason: swimming pools are, especially in small-town structures, important social reference points. When it opened, the Erzgebirgsbad was the first of its kind in the region and was well attended for many years. Later, however, other pools with a similar profile were built in the immediate vicinity. As a result, the number of visitors dropped, and moreover, the town of Thalheim, once a glorious location of the textile industry and secret "stocking capital" of the GDR, lost almost half of its population.

Nearly all of the town's industrial factories closed down in the years following the political turnaround. The city shrank, and young people in particular moved away. As a result, the financial situation of the city itself deteriorated, but the cost of maintaining the baths increased. The bath, once built with pride, threatened to drag the community into the abyss financially. Amid protests, the bath was closed in 2014 and has stood empty ever since. For a short time, it was used as accommodation for refugees, also accompanied by protests.

However, this ended an almost 100-year history, as the forerunners of the Erzgebirgsbad were already established in the early 1920s. The closure and possible reopening of the bath have been discussed in the community ever since. The identification potential of the bath is therefore enormous.

We are looking for artists of all genres and forms of expression who feel inspired by the location and this year´s theme "PLANSCH". Participation is possible both in the form of a residency and with submitted works. To apply for a residency of up to four weeks, a coherent concept must be submitted that describes both the work that will be created and how it will be realized. We are strongly interested in participation processes with local people (including artists, of course). Ideas that take this into account are very welcome, but not a requirement.

We are aiming for an exhibition with 20 to 30 works. The exhibition is a central part of the art festival, which is also created by concerts, readings, lectures and other formats.

For shorter residency periods, the allowance and the budget for materials will be reduced proportionally.

The application is based on:

The Begehungen team will deliberate on the selection of applications and make the participation decision.

We will announce the result in early May 2022.

NOTES ON THE APPLICATION PORTAL

For further questions: info [at] begehungen-chemnitz.de

The art festival Begehungen has been taking place in Chemnitz since 2003 - as the largest off-culture event in the city. The trademark is an unconventional and low-threshold approach to art. For this reason, the Begehungen are not just a temporary art exhibition, they are a social meeting point for people of different backgrounds. An extensive supporting program consisting of performances, readings and concerts is also an essential part of the festival.

The tradition of the annually changing location is important and committed to the festival name. In addition to micro-areas on the Sonnenberg and the Brühl, a former prison, an old school, the Rabenstein Palace of Culture, a garden section and abandoned industrial buildings were the venues of the art festival.

The Begehungen see themselves as an inclusive and barrier-free festival with extensive offers. Entry to all program items and the exhibition is free.

We have a common idea. One likes to build, one likes to talk. Some like to discover unused places. Everyone is looking forward to visits from other countries and young art.

One is interested in music and bands, one likes theater. Some want to be part of what is happening in the city, others just want to have a nice weekend.

One is soldering and wiring, one is thinking about Chemnitz and Europe. Some like to bring light into the dark, others want to break down barriers. Everyone likes to get dirty.

We want a festival for everyone. Are you interested in joining us? Then don't hesitate and write us an email: helfer [at] begehungen-chemnitz.de